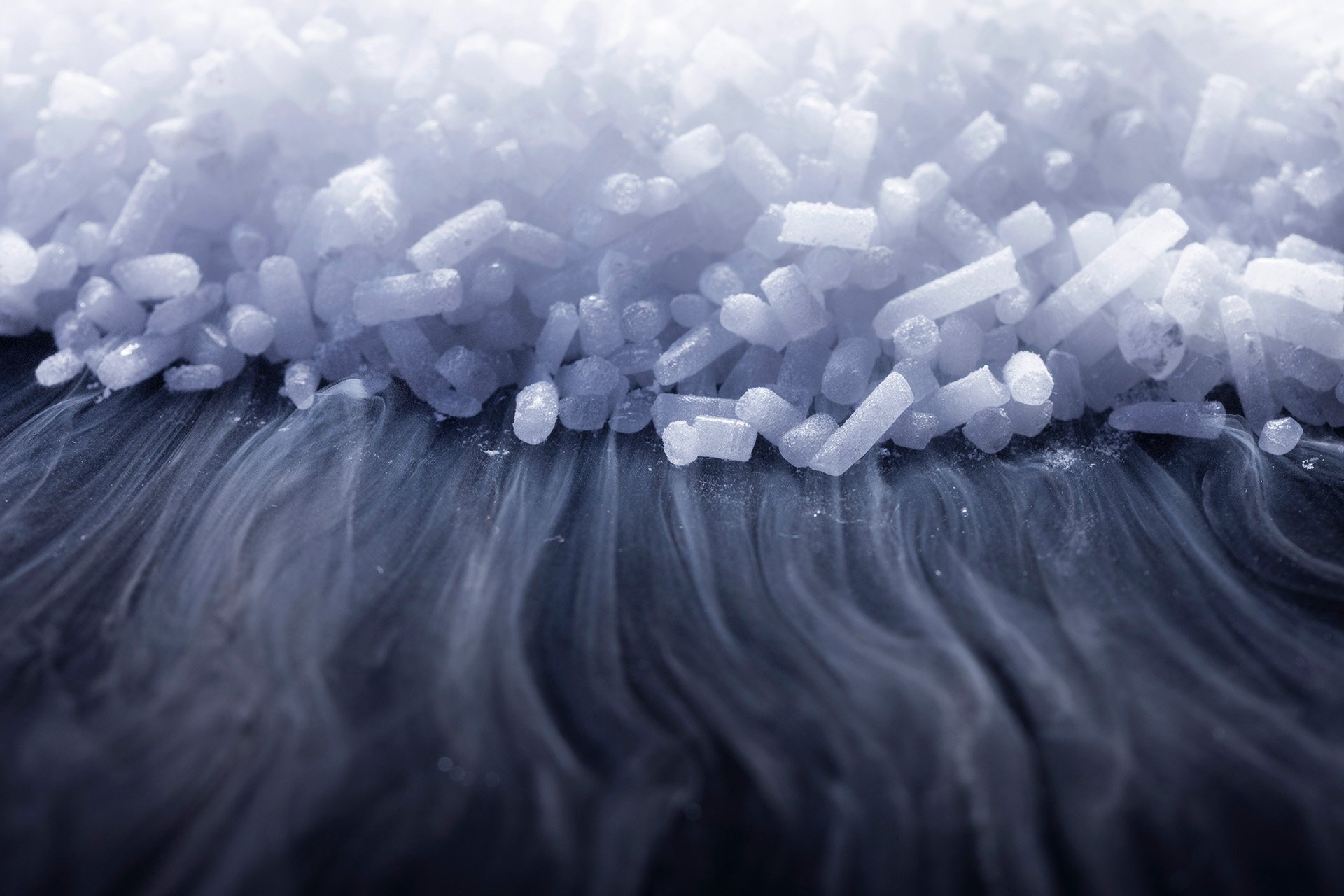 An important research into an alternative, environmentally non-invasive surface cleaning process for various metals was conducted as a collaborative effort between the Jožef Stefan Institute, Dolenjske Toplice-based company FerroČrtalič, whose development has been focusing on ecological technological solutions in the field of surface treatment technology for as many as 57 years, and the Joanneum Research Institute from Austria. The aim of the research was to determine the effects of the environmentally friendly dry ice cleaning process on the surface of aluminium alloys and the resulting impact on the adhesion quality of protective coatings.

The European Union’s ambitious climate targets in terms of reducing carbon dioxide (CO2) emissions and restricting the use of chemicals harmful to the environment and human health have set high standards for the transport industry. Transportation accounts for about one-third of the EU’s total carbon dioxide emissions, 72% of which comes from road transportation  The current target is to reduce CO2 emissions by 60% compared to the levels from 1990.

Technological innovations that improve fuel economy through the use of new materials can facilitate the transition to a more efficient and more sustainable European transportation system. Since vehicle mass affects fuel consumption, one of the automotive industry’s priorities is to reduce vehicle mass by using lightweight materials. Among them, the most important are aluminium alloys, which are characterized by low density, high strength-to-mass ratio, relatively high tensile strength and ease of workability. The average consumption of aluminium in European cars has more than doubled over the last decade, and the trend continues to rise. Today, the average mass of aluminium in cars is more than 150 kg, even exceeding 200 kg in upmarket cars. Reducing a car’s mass by 100 kg saves an average of 8 grams of CO2 per 1 km and 0.315 litres of fuel per 100 km. Considering there are around 16 million cars in Europe, this means roughly 40 million tonnes less CO2 emissions over the car’s life span [1]. In cars, aluminium alloys are used for the manufacture of engine block and cylinder head, castings, vehicle frame, bodywork, brakes, etc. Aluminium alloys have always played a major part in the aviation industry as well. In the Boeing 747, for example, aluminium alloys make up more than 70% of the aircraft, whereas in the Boeing 787 Dreamliner, this figure stands at a mere 20% [2]. Aluminium alloys are used for the manufacture of various aircraft components where high strength, toughness and fatigue resistance of the material are required, such as wings, fuselage, seat tracks, etc. Figure 1 shows the Bombardier CRJ200 owned by FerroČrtalič, which they use in their research into optimizing the surface cleaning of various metals with innovative, environmentally acceptable methods.

Despite their remarkable mechanical properties, aluminium alloys are susceptible to various types of corrosion, particularly pitting and intergranular corrosion, due to their heterogeneous structure with numerous intermetallics and inclusions. For this reason, they need additional protection, which is typically multi-layered (Figure 2) and contains at least three components: pretreatment of the metal surface, primer, and topcoat. Metal surface pretreatment generally takes the form of a chemical cleaning process using both acidic and alkaline solutions [3]. Sulphuric or phosphoric acid (H2SO4 and H3PO4, respectively) and various surfactants are used in acid cleaning. The solution may also contain hydrofluoric acid (HF). In alkaline cleaning, however, sodium hydroxide (NaOH) is typically used, which may also contain various additives, e.g. for degreasing, and so on. Alkaline etching is usually followed by acid cleaning, which removes excess alloyed metals, or smut, from the top layer after etching – in a process called desmutting.

The growing trend of using aluminium alloys in the transport industry is also driving an increase in the consumption of various chemicals used in the production of protection system and, naturally, also chemicals used in pretreatment [4]. In light of the set targets for reducing the use of aggressive chemicals, it certainly makes sense to look for new alternatives to chemical cleaning processes for metals. This paper will focus on the possibility of using dry ice as an alternative to the metal pretreatment process involving chemical cleaning.

For as many as 57 years now, FerroČrtalič has been following the principles of sustainable development, seeking to develop ecologically efficient surface treatment solutions with a minimal environmental footprint thanks to their technological sophistication. One such solution developed by FerroČrtalič is a surface cleaning technology using dry ice, which is gaining ground in the industry on account of its ecological benefits – it requires no use of secondary pollutants such as solvents or abrasives, thus ensuring a comprehensive, completely dry (waterless) and efficient product cleaning process (Figure 3). The advantage of cleaning with dry ice is that it does not displace or damage the base and quickly sublimates into the air, does not leave secondary residues and does not erode or drain the target surface. With its mobile capacity, it facilitates access to the surface of various machines and ensures efficient cleaning without having to disassemble and relocate the machine.

As part of the KET4CP (Key Enabling Technology for Clean Production) program, we were awarded a project titled “Advanced environmentally friendly surface treatment of aluminium and its alloys used in the aviation industry”, with lead partners being the Jožef Stefan Institute, FerroČrtalič, and Joanneum Research Institute from Austria. The aim of the research was to determine what effects the dry ice cleaning process has on the surface and to identify the resulting impact on the adhesion quality of coatings. The core material was a 2024-T3 aluminium alloy, where the surface of the aluminium is coated with a protective layer of aluminium a few micrometers thick (what is known as a clad alloy). This is a common alloy protection process, since aluminium has better corrosion resistance than the alloy, and the material retains the mechanical properties of the alloy itself. For comparison, we took a commercial process of alkaline chemical cleaning followed by acid cleaning, where the experimental conditions were selected according to the manufacturer’s instructions. Analyses were therefore performed on three types of samples: a) uncleaned base alloy which had not been subjected to pretreatment, b) chemically cleaned alloy, and c) alloy cleaned with dry ice. 2-D and 3-D surface topography was measured, the surface morphology was recorded with a scanning electron microscope, and a basic chemical analysis was conducted using energy-dispersive X-ray spectroscopy.

Scanning electron microscope images have revealed the presence of impurities (dark flecks) on the surface of the uncleaned sample, and intermetallic inclusions (light particles) are also visible. The latter contain iron, copper, silicon, etc. (Figure 5). Intermetallics are therefore chemically distinct from the surface of the matrix, which in this case is the aluminium layer underneath which is the 2024-T3 base alloy. Also given are spectra of the elemental composition recorded on the matrix or on the different inclusions. The dry ice pretreatment process removed impurities while maintaining the morphology of the aluminium cladding matrix. Intermetallics are still visible in quantities similar to those on the uncleaned surface. In contrast, chemical pretreatment changes the morphology of the sample – the aluminium layer cladding has been completely removed, revealing the characteristic morphology of the 2024-T3 alloy with a multitude of intermetallics and inclusions.

Next, corrosion resistance of the samples was tested using a standard salt spray chamber corrosion test at 35°C and with 5 wt% sodium chloride. Figure 6 shows the samples’ surfaces before and after the 24-hour exposure. While corrosion damage and corrosion surface products are already observed on the uncleaned and chemically cleaned surface, the surface cleaned with dry ice is still without any signs of corrosion.

Based to the results presented here, the cleaning of metal surfaces with dry ice is a viable alternative to chemical cleaning. Since the dry ice surface cleaning process is non-invasive, it does not remove the aluminium cladding from the 2024-T3 aluminium alloy – the corrosion properties are therefore preserved. In contrast, the chemical process removes the protective oxide layer, which significantly reduces the alloy’s corrosion protection. The key difference, of course, is the positive environmental acceptability of the dry ice application process, as the process uses no chemical cleaners and is fast and economical. Preliminary research has shown that the surface cleaned with dry ice would allow for a uniform and protective application of conversion coating, which is in fact the subject of further research.

Credits: We thank the KET4CP program (project number MGP-2019-06-05) within the European Union’s Horizon 2020 program for funding this project.

To check out how our dry ice/snow solutions can improve your cleaning and production processes, please visit our dry ice technology page.

A day at work: Mirko Kirn Previous post Being an apprentice in your own family’s... Next post

Cleaning the interior of a 65-year-old car...

Being an apprentice in your own family’s business

A day at work: Mirko Kirn

A day at work: Leo Andolšek

Cleaning the interior of a 65-year-old car using the latest...